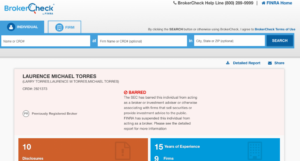 In September 2017, the Securities and Exchange Commission (SEC) barred Torres and sanctioned him to $160,000 in civil and administrative penalties and fines, $225,359.36 in disgorgement and $25,748.02 in a monetary penalty other than fines for participating in any offering of a penny stock. The SEC found that between August 2012 through September 2014, Torres violated the antifraud provisions of the federal securities laws by recommending a high-cost pattern of frequent trading that he had no reasonable basis to believe would be suitable for eight of his customers or for anyone, by making material misrepresentations and omissions regarding the high-cost pattern of frequent trading that he recommended to those customers, by churning those customer accounts and by engaging in unauthorized trading therein. Torres failed to disclose to the eight customers that the pattern of frequent trading that he recommended, combined with the high per-trade transaction costs, was extremely likely to cause losses. Torres also executed trades in non-discretionary accounts without customer approvals.

In March 2017, Torres was suspended by FINRA after he failed to comply with an arbitration award or settlement agreement or to satisfactorily respond to a FINRA request to provide information concerning the status of compliance.

Torres has been the subject of seven customer complaints between 2015 and 2020, according to his CRD report:

May 2020. “Unsuitable investments, Concentration, Churning, and failure to “know your customer.” The customer is seeking $277,071 in damages.

February 2018. “High pressure sales techniques – unsuitable investments.” The customer is seeking $692,102.20 in damages and the case is currently pending.

April 2017. “During April of 2014 the Claimant [CUSTOMER NAME] opened an account [ACCOUNT NUMBER] with Laurence Torres, broker previously with Alexander Capital L.P. The account was closed in October of 2014. The Claimant deposited $232,451 into the account, the entire amount lost due to the following infractions committed by Mr. Torres. Over concentration in one Security Excessive use of margin High speculative Investment.” The customer is seeking $232,451 in damages and the case is currently pending.

November 2015. “Unsuitability-breach of fiduciary common law fraud-breach of contract.” The customer sought $400,000 in damages and the case was settled for $95,000.

October 2015. “Failure to follow instruction. Customer did not understand the use of margin. Unsuitable investments.” The customer sought $25,000 in damages and the case was settled for $20,000.

Pursuant to FINRA Rules, member firms are responsible for supervising a broker’s activities during the time the broker is registered with the firm. Therefore, First Standard Financial Company LLC and Alexander Capital, L.P. may be liable for investment or other losses suffered by Torres’ customers.