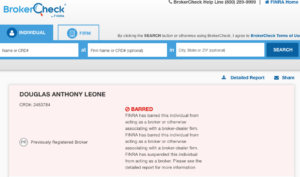 In May 2018, FINRA barred Leone after he failed to appear and provide FINRA on-the-record testimony in connection with its investigation into Leone’s potential misconduct while at his member firm involving, among other things, unsuitable recommendations and excessive trading involving multiple customers.

In May 2017, FINRA suspended Leone after he failed to respond to FINRA request for information.

In July 2014, Leone was named a respondent in a FINRA complaint alleging that he, with his member firm and other firm representatives, excessively traded and churned customers’ accounts. According to the complaint, “Leone, the firm and the other representatives engaged in a manipulative, deceptive and fraudulent scheme by churning the accounts of customers. They acted with intent to defraud and/or with reckless disregard of their customers’ interests by seeking to maximize their own remuneration in disregard of the interests of their customers.”

According to the FINRA complaint:

Leone has been the subject of nine customer complaints between 1998 and 2019, two of which were closed without action, according to his CRD report. Recent complaints include:

April 2019. “Claimant alleges excessive trading on margin with no downside protection, False and misleading statements regard the risks of his investments, the churning of his account, breach of fiduciary duty, breach of contract, gross negligence, and suitability.” The customer is seeking $250,000 in this pending complaint.

April 2018. “Churning, negligence, unsuitability, unauthorized trading, breach of contract.” The customer is seeking $22,623 in damages and the case is currently pending.

January 2012. “Alleged churning, misrepresentation, breach of fiduciary duty.” The customer sought $77,000 in damages and the case was settled for $9,999.

Pursuant to FINRA Rules, member firms are responsible for supervising a broker’s activities during the time the broker is registered with the firm. Therefore, Salomon Whitney Financial may be liable for investment or other losses suffered by Leone’s customers.